For several years, Diverse: Issues In Higher Education has produced the Top 100 Degree Producers rankings of the institutions that confer the most degrees to minority students.

Using the menu above, you can generate rankings according to the total number of degrees awarded to minority students across all disciplines as well as in specific disciplines.

Each list provides the total for the previous year, followed by the reporting year counts for males, females and total. The final two columns show two percentages. The first percentage indicates how the number of the minority category degree recipients compares with all degree recipients at that institution within that discipline. The second percentage column indicates the percentage change in that minority groups’ number of graduates at that institution from the previous year.

The lists containing total degrees for each and all minority groups include 100 institutions. The lists for specific disciplines contain typically, but not always, 50 institutions each. A given list may have slightly fewer or more institutions because of ties in the rankings.

Use the menu above to discover the institutions that confer the most degrees to students of color. Search by institution name, state, discipline or race/ethnicity of graduates. To generate the Top 100 ranking for all minorities combined, choose “Total Minority” option under the Race drop-down menu and choose “All Disciplines Combined” from the Major drop-down menu.

Source: Diverse: Issues In Higher Education analysis of U.S. Department of Education reports submitted by institutions. Online “campuses” are seen as a single entity, even though they enroll students globally. 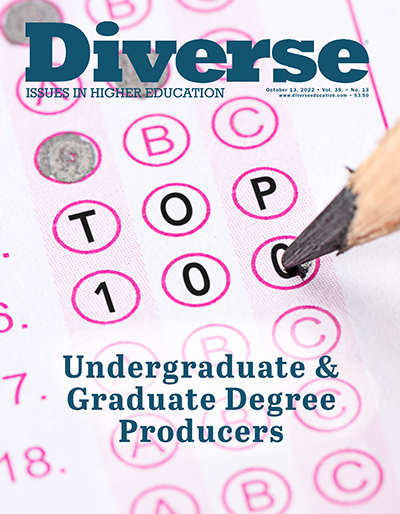